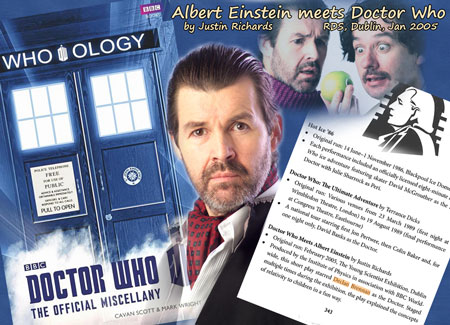 Albert Einstein Meets Doctor Who, produced by Vermilion Productions in 2005, featured (l-r) Declan Brennan as the 'Doctor' and Donal Courtney as 'Einstein', at the BT Young Scientist Exhibition in the Royal Dublin Society.

Vermilion Productions was established by Declan Brennan in 2004 when working with fellow former students of a programme of acting and stagecraft courses at the Gaiety School of Acting in Dublin. It has provided a nucleus for performers and creative teams to meet from time to time to create productions of a variety of works for theatre and other venues.

Some of these projects have involved small groups of people coming together to do work that they are passionate about, but which might not excite commercial interest. At the opposite end of that spectrum, Declan won a tender to produce a show for BT Ireland early in their sponsorship of the Young Scientist Exhibition. He worked with actor and director Donal Courtney on the project in 2004 and together they performed as Dr Who and Einstein, respectively, in Albert Einstein Meets Doctor Who as part of BT’s sponsorship of the ‘Young Scientist Exhibition’ in Dublin. The show, which was written by Justin Richards for BBC Worldwide and the Institute of Physics, was performed a couple of times each day in the RDS, Dublin during the exhibition in January 2005. The largest audience of around 1,200 adults and children was on the final weekend.

The latest venture, David Mamet’s Oleanna, is a project that director Brian Molloy had in mind for some time. When he approached the actors and producer, with whom he wanted to collaborate on bringing that challenging play to life, Vermilion Productions was the framework around which a talented group of creative people was assembled. There is much more about Oleanna on the pages of this site, starting here.