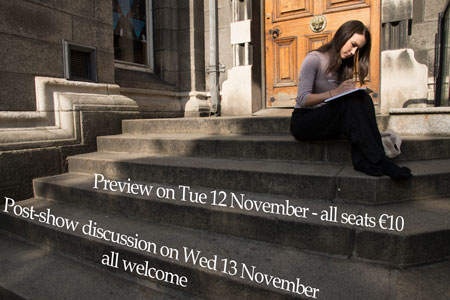 Following the performance on Wednesday 13 November 2013, many members of the audience stayed back to take part in a discussion about the play. The four people directly involved in the performance, on and off stage, spoke about the issues raised and their approach to bringing the play to life. It was interesting to see how, twenty years after David Mamet created it, this play continued to trigger debate and give rise to different opinions. It was also great to hear such positive feedback on what was presented that evening.

A short video introducing the story and the characters in 'Oleanna'.

"One of the ten best plays of the year"

Set in one room and played by two actors, the Mill Theatre Maureen O'Hara Studio was ideal for Oleanna. The Studio can accommodate 45 seats. The design of this production called for an intimate space where every audience member had a clear view and felt close to what was happening. It was the first time that the Studio had been used in this way, with tiered seating and audience on both sides; and it was judged to be a great success.

Oleanna is a powerful play about power – two people using and abusing it – a young woman and an older man. They each in turn take and lose control of an emotional powder keg. In the hands of these characters, and the words they use and abuse, their failure to connect and communicate leads to an interpersonal minefield.

Considered to be one of David Mamet’s most controversial plays, this presentation of Oleanna by Vermilion Productions brought the Pulitzer Prize winning playwright’s compelling drama to the Mill Theatre in November 2013.

Director Brian Molloy and producer Óran O'Rua worked with the Mill Theatre to configure the small studio space in a way that heightened the intensity of the drama and made for an intimate, absorbing audience experience. With the simple design of this production, complemented by the music composed for the play by Kevin Nolan, the stage is set for you to engage with the characters, 'John', the professor (Declan Brennan) and 'Carol', his student (Aoibhinn Finnegan), as they engage with one another.

Ever since its first performance in New York in 1992, this play has divided audiences on who's right and who's wrong and even what it's really saying or suggesting beneath its highly entertaining surface layer of drama. If you know the play, you'll know it lends itself to many interpretations - and if it's new to you, why not take a seat on either side of the performance space and see which sides of the arguments you sit on.

David Mamet is deservedly famous for many aspects of his writing, but none more than his unique ability to capture the essence of natural dialogue, particularly when it involves complex or even chaotic, disjointed thinking by his characters. In Oleanna he positions his actors in one of his signature minimalist settings and has them deliver some of the best examples of his craft. Don't miss this opportunity to enjoy that aspect and everything else that adds up to making it, in an extension of what that Time reviewer might justifiably say in retrospect, 'one of the best plays - period'.

« See more about the people behind the production on this page.

« For more about the themes and issues in the play, read on.

'Oleanna' was presented by Vermilion Productions in the Mill Theatre by arrangement with Josef Weinberger Plays Ltd.