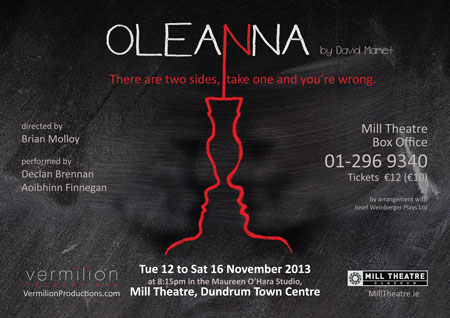 As rehearsals got underway, director Brian Molloy, and the rest of the team behind Vermilion Productions presentation of David Mamet’s ‘Oleanna’, spoke in this video about the play and their thoughts on staging it at the Mill Theatre Maureen O’Hara Studio in the Dundrum Town Centre, Dublin, during November 2013.

Two other sides of the creative process

The visual identity for 'Oleanna', created by Sam Caren for the print and online material, combines two elements that capture the multiple ways of interpreting this play. The two faces drawn head-to-head in the brushed chalk dust of a college blackboard are separated by the dividing line of the red graphic, which is reminiscent of psychologist Edgar Rubin’s face/vase optical illusion. Together, both elements suggest the ambiguity and ambivalence of some of what is presented in the play and the barrier to understanding that exists between the teacher and his young student during their close encounter.

The music composed for the play by Kevin Nolan set out to do something similar in sound. In the 'Off-Stage Thoughts' video (see above), Kevin says that his response to the brief was to capture the mood and essence of the play in the structure and rhythm of what he composed. At the core of the piano music he created, there is a repeating motif in the left hand with a melodic narrative built on top. As the melody is established, the coherence is deliberately disrupted by discordant elements, which echo the conflict that unfolds. The multiple aspects of the play are mirrored by four or five musical ideas, which open and close each act. A variation of that music is featured in the short promotional video. The music used in the play consists of three short pieces based on elements in a longer 'Oleanna Suite' (5m25s), composed by Kevin, which you can hear using the player below. 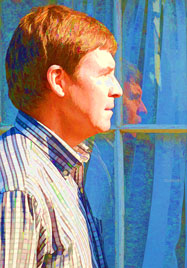 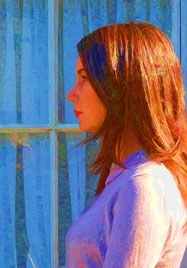 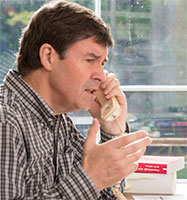 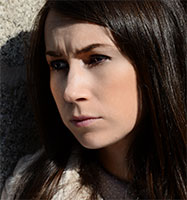