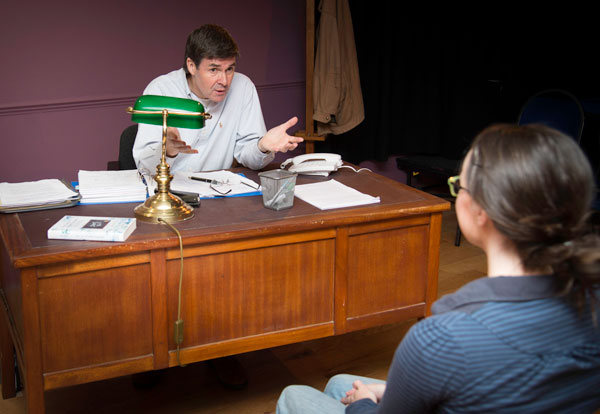 The professor, 'John' (Declan Brennan) and his student, 'Carol', (Aoibhinn Finnegan) in 'Oleanna' at the Mill Theatre Studio in November 2013.

That line from Tom Stoppard's play-within-a-play, 'Rosencrantz and Guildenstern Are Dead', captures the backstage moment when everyone in a production knows that the final, essential ingredient has arrived and the performance can begin.

More so than some plays, David Mamet's 'Oleanna' places the audience in a very central position. The spectator is more than an observer. As he or she makes sense of the interaction between the two characters, the meaning derived is in the mind of the beholder and it may well be different for each one of them. This play tends to be something that many, on both sides of the fourth wall, take away with them and think about long after the final scene fades.

Placing the actors in the middle, with the audience on both sides seemed just right for this play. Whether or not they attend as an observer, evaluator, judge, jury or even imaginative traveller in either character's shoes, the closeness offered to the audience by the small performance space allowed for an intensity that could heighten what each person experienced, as they pondered their own answers to the questions raised.

The lack of distance between the players and the spectators also allowed for an intimacy, particularly in the quieter moments, that added some of the characteristics of a cinematic close-up or a fireside storyteller. The effect of space on performance is not unique to drama. There is a parallel interrelationship between setting and reception in music. The intricate detail of chamber music feels at home, close-up in a smaller room; the power and complexity of an orchestra works well with the slight delay afforded by the more distant walls of an opera house; and with much less rhythmical detail to be smothered, the long sustained notes of a soaring choir are enhanced by the cavernous reverberations of a Gothic cathedral. It's hardly surprising that while a performance can be made to function anywhere, there is a synergy and a different energy when scale contributes appropriately to the context within which the story is received. All of which is a long-winded way of saying that, for this play, small worked really well.

What you see and what you get

Much has been written about how and why this play caused such a stir when it first appeared; and indeed how its impact has been modified by falling on ears that have different sensitivities twenty years later. What remains is the fascinating fact that it continues to fall differently on different ears. Quite apart from any controversy in the issues raised, the 'game of gaps' that Mamet plays tells its own story. One of the things he set out to do was to show how we fill in the gaps when a sketchy outline is presented to us. We join the dots based as much, if not more, on how we feel rather than what we think is an objective analysis. Lets face it, we are emotional beings first. One of the challenges in staging this play is to position the strong views of each character in a sufficiently neutral way that it enables Mamet's game. While the text orchestrates a power see-saw from Act 1 to Act 3, the playing can facilitate a similar oscillation in understanding and sympathy for each character. It doesn't have to be played that way (and it's not easy), but when their flaws and their vulnerabilities are as evident as their righteousness, it can encourage us to think about what we feel and ask why. It can also mean that we get more out of it than just what we see at first.

Power is exercised by both characters on a continuum that extends from use to abuse. They are defined partly by their decisions on how to use it when they have it, how far they take it and the extent to which it contaminates what might have begun as a good intention. Language is a very clear instrument of power in the play. Some big words, complex or disjointed sentence construction, interesting but obscure metaphor and rapid delivery, at times combine to demonstrate dominance and introduce noise that reduces clarity. Given what can and does get in the way of clear communication, not least the closed corners of minds that don't listen, it's hardly surprising that so much of what is said is misunderstood; it's a miracle that anything does get through - so too for the characters in this play! When both actors find that elusive point of balance between bland neutrality and painting their positions in primary colours, the audience is free to play Mamet's intriguing game driven only by their own experience, values, judgement and prejudice. If it's true that this play is partly created by the audience, as they can come to their own conclusions about where right and wrong reside in these characters, maybe none will ever see quite the same thing. One thing is certain from what some members of the audience said to us, they are unlikely to remain a passive observer for long. 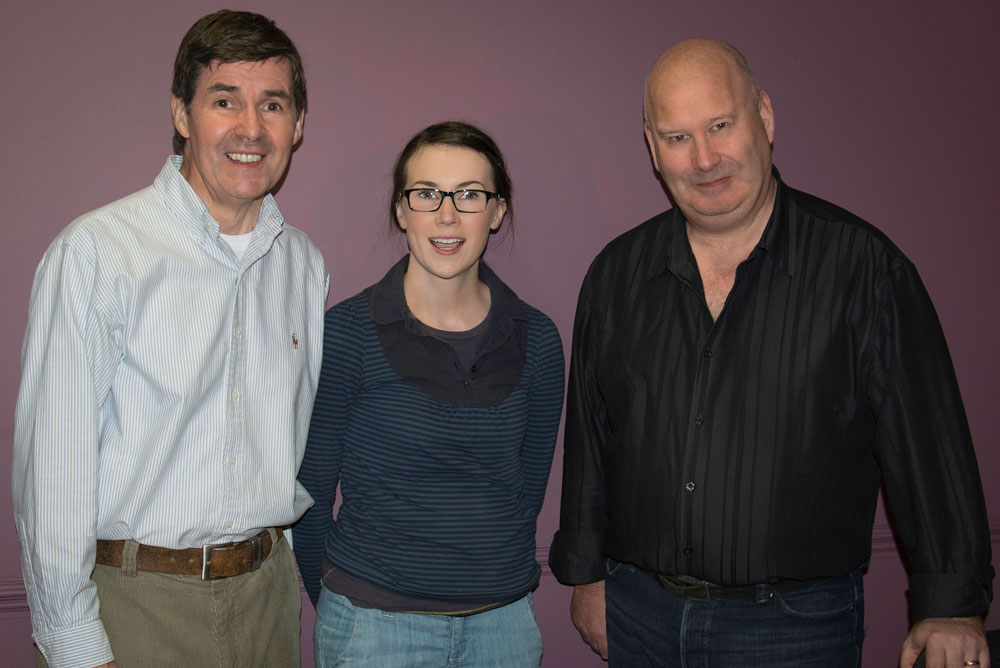 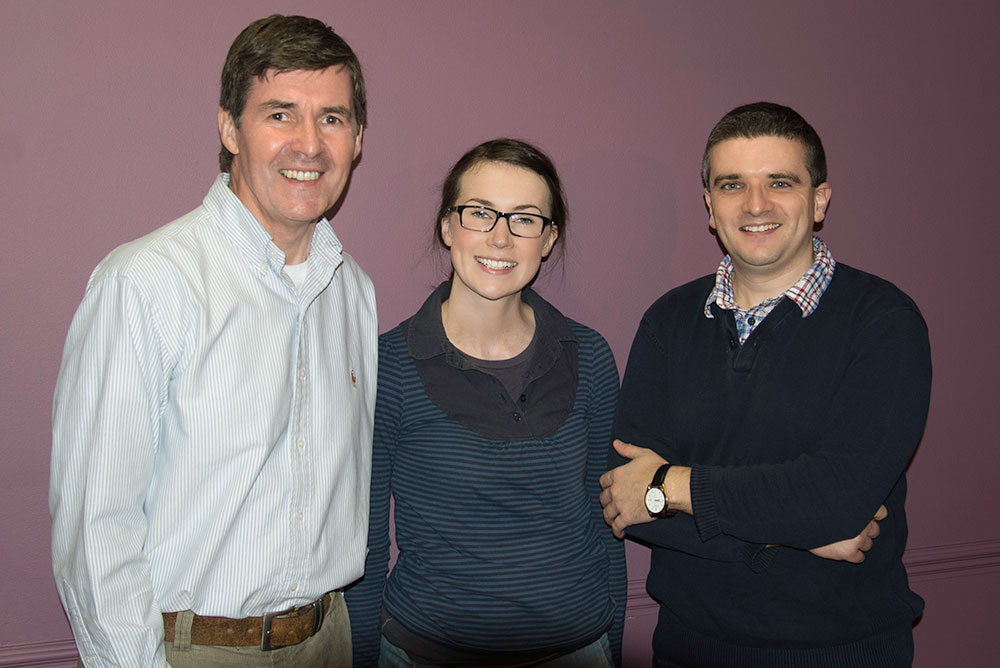 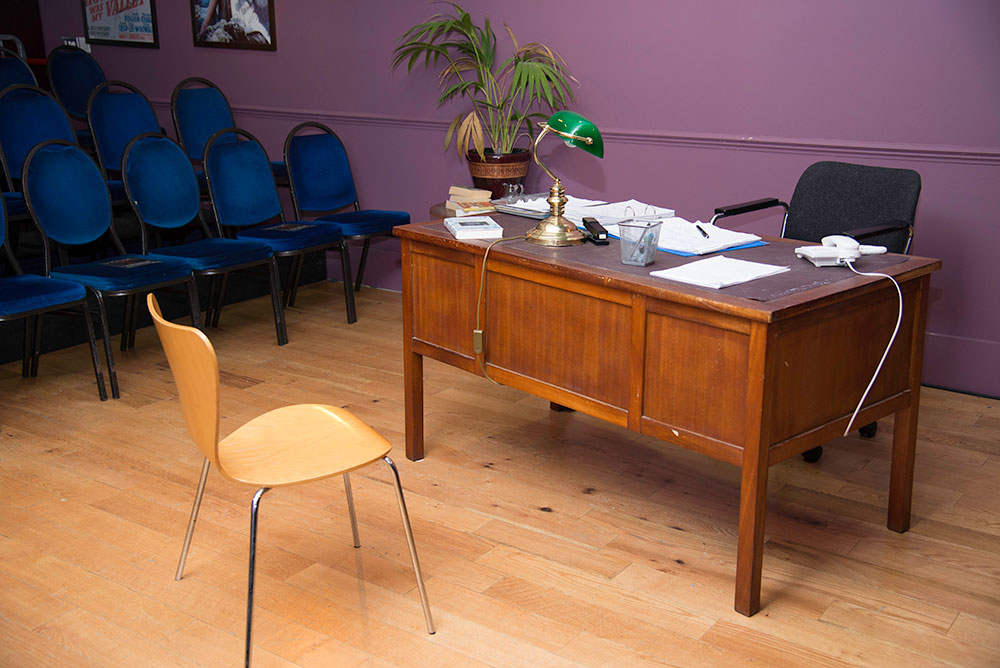 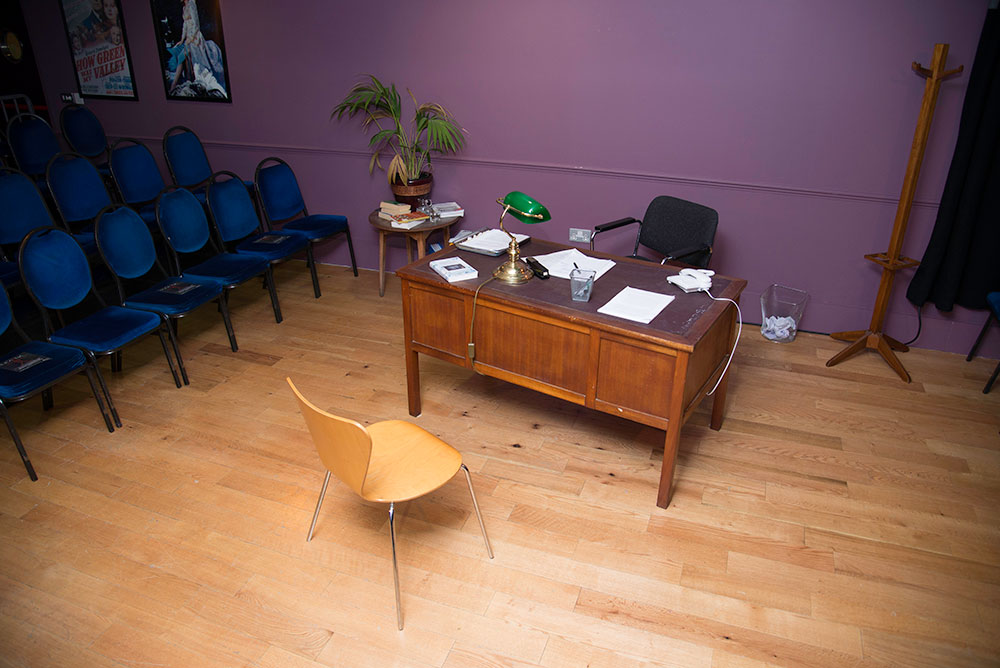 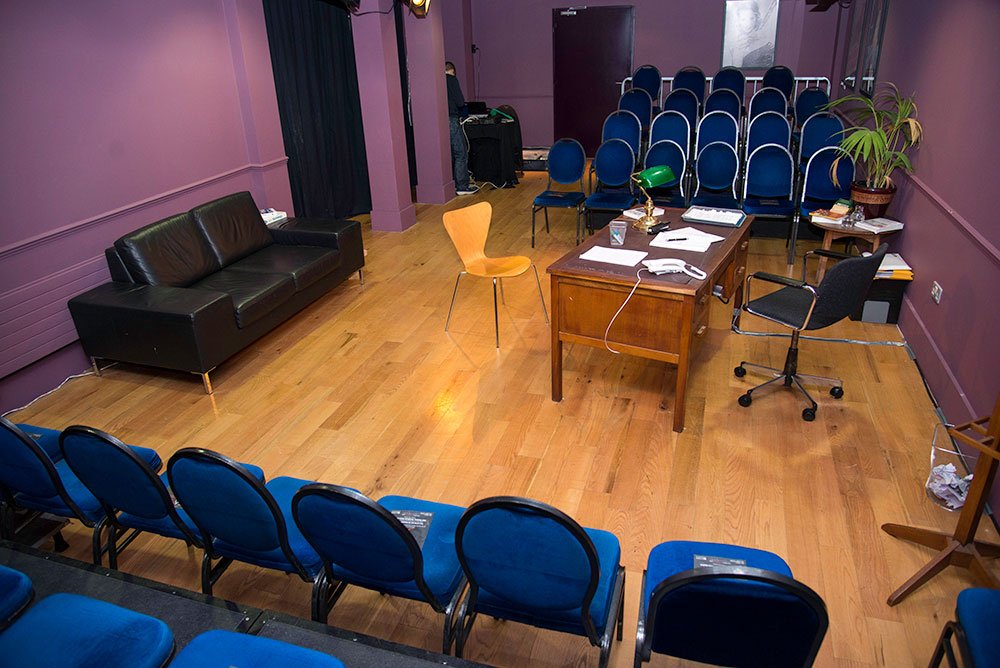 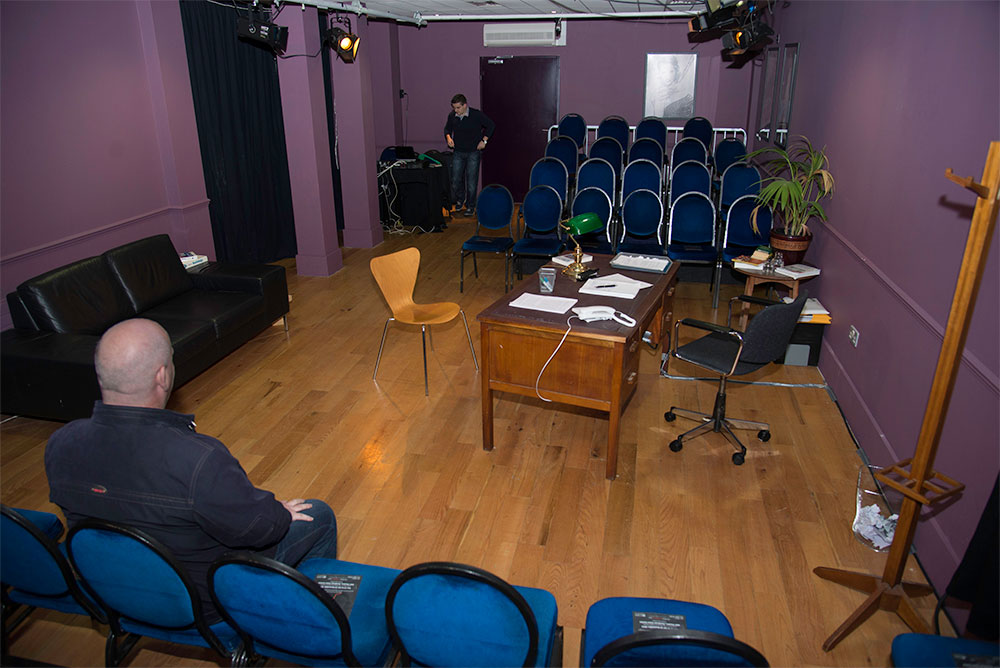 It's in the nature of a work like this that not everyone will be drawn to it and neither will they read it the same way or like it to the same extent. So, it was great when the manager of the Mill Theatre passed on the following comment sent by a very satisfied member of the audience following the preview performance on 12 November 2013:

"Big congratulations to all concerned on the opening performance of Oleanna! Due to the disputational nature of Mamet's play, I attended more out of intellectual interest rather than expecting to enjoy it in the accepted meaning of that term. But enjoy and delight in the production I most certainly did - it was wonderful! The factors contributing to its success were the intimate playing space, the technical input, direction, and (principally) the very high quality of the acting."

Richness beneath and beyond the obvious

Most stage presentations are the tip of an iceberg of work, which usually involves many unseen hands and considerable effort behind the scenes. This show was no different. In his preface to 'Writing in Restaurants', Mamet notes how he was taught at Sanford Meisner's theatre school (the 'Playhouse' in New York) that every aspect of a production should reflect and be 'subordinated to the Idea of the Play'. With the help and skilful contributions of director Brian Molloy, producer Óran O'Rua, composer Kevin Nolan and graphic designer Sam Caren, the two actors were part of a team of like minds that shared ideas, debated, argued and ultimately found a coherent approach to the presentation of the play, not only on stage, but also in how it was framed before and afterwards. 'Oleanna' demands a high level of careful attention to detail and a very subtle interpretation, to get the balance right between the characters as the power shifts from one to the other. It could be played like soap opera, but there's so much more to be found when the audience is invited to go beyond the obvious. There are times when the words scream frustration or anger, but the action cries confusion and restraint before finally exploding. The depth is in the ambiguity around what these characters understand and misunderstand from the words on the page — and those words have been crafted with incredible precision and musicality. Mamet's dialogue is distinctive. He does not place the play geographically, but many agree with what journalist Lewis Lazare believes. In an article written for the Chicago Sun-Times in 2007, Lazare said that 'Mamet's distinctive, clipped, rhythmic, singularly visceral style continues to suggest he found much inspiration for his unique writing in the no-nonsense, gritty, all-American urban world of Chicago'.

We are not alone in holding the play in high regard or feeling challenged and humbled by what was needed to bring it to life. In an interview about playing 'John' with Clare Foster as 'Carol' in the Lakeside Arts Centre at the University of Nottingham in April 2011, no less an actor than Alistair McGowan captured what it's like to take Mamet's words and transform them into a performance: "It's thrilling, but terrifying at the same time. We've both said we get nervous every night and never feel you know it enough and it's genuinely the hardest thing I've done, but I think that is reflected in the way it inspires the audience. It's like an unusual piece of music, you've never heard anything quite like this before. [...] It's such a rich play and it's a very rich experience for us and I think a very rich experience for an audience." 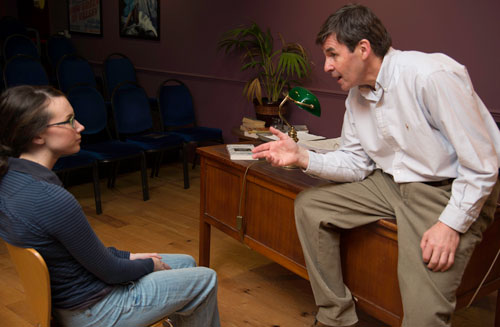 'You are the reasons why.'

Herbert Blau begins his book 'The Audience' with an entry from Virginia Woolf's diary at the beginning of the Second World War, 'No audience. No echo.' Sometimes when everyone gathers round to hear a story, to take part in what happens, something more is present than those who turned up. Without sounding overly mystical about it, there can be some magic involved when we 'make believe'. The power of a work like 'Oleanna' is that it can leverage the commitment of the performers and the participation of the spectators in a way that heightens the experience for everyone. That's what made 'climbing Mamet's mountain' so interesting and so worth the effort.

Theatre faces stiff competition from other forms of creative expression — for attention, support and the revenue it needs to survive and thrive. So, it was great to be part of this small venture that succeeded artistically and commercially. It was also very rewarding to play it no more than an arm's length from the front row; and to find that it was the type of play where people wanted to talk to us about it afterwards. One such person, who said that he rarely goes to the theatre, commented on how this production had an unexpected impact, quite apart from the compelling drama or the issues it explored. He said that the performance in the round and in the intimate venue gave it "an up close and personal feel, more like film or television, but shared less anonymously with others in the room. It really gets you talking and thinking."

It's a truism to say that there would be no theatre without the audience, but it's also fair to say we found that 'Oleanna' works best when it's "up close and personal". The point was well made ironically by the Austrian playwright Peter Handke in his 1966 'anti-play', 'Offending the Audience' — one of his characters addresses them and says "You are the centre. You are the occasion. You are the reasons why". The graphic design created by Sam Caren for 'Oleanna'. The two faces drawn in chalk dust on a blackboard formed a central part of the promotion of the play on the internet and in print during the months prior to the presentation by Vermilion Productions in the Mill Theatre's Maureen O'Hara Studio from 12 to 16 November 2013.